My first post of the year was called "A New Year," as I'm sure many of you remember 😉
January 1st does certainly mark the turnover of a new calendar year, there is always something refreshing and exciting about the turnover from August to September. But as other bloggers have said, there is just something about September 1st that feels "new yeary," especially for those who are on or somehow connected to traditional school calendars. Also, September is the month in which autumn officially begins, and that is by far my favorite season. Personally, I'd like to say that September 1st feels like a good time to declare a new year in my little family. In August 2017 my husband was called away for a two and a half week Army training and then days later for a short hurricane relief deployment. Between that time and now we've faced a lot of hurdles, some of which I have documented here, and I'm really ready for that "year" to be over.

So, here we go. September 1st(ish)! A new start of a new year in a new place! I will detail my first month as an Assistant Professor at Olivet in October, but in this blog post I'd like to go over my last month of summer fun and then the preparation (ahem, or lack of) that I did leading up to the start of the fall 2018 semester.

To round out the summer, Wade and I spent two weeks in beautiful Durango, CO. This was our fourth time there in the same number of years, and we always really enjoy ourselves in this lovely mountain town. We stay at my Grandpa's condo near Purgatory Resort, and we like to venture into town as well as by and through the gorgeous natural landscapes. One of my favorite views in all of the world is Haviland Lake. It's not far off the main road down the mountain, but the accessibility in such a serene setting is one of my very favorite things about it. The lake sits peacefully in the San Juan National Forest at the base of the San Juan Mountains. The lake is no more than two miles up the road from the condo, so we make sure to visit it every time we go.

In addition to visiting the lake we also ate out at a lot of fun places and had delicious food like a spicy tuna sushi burrito, a chocolate crepe, vegetable curry, and galub jamun. We celebrated our seventh wedding anniversary in Durango, and we ate sushi and seafood ramen and a raspberry sorbet dessert. We also did a couple hikes while we were in the area, but there were a few areas blocked off due to mudslides that occurred shortly before we arrived. A forest fire called the 416 fire burned through almost 55,000 acres of the San Juan National Forest for two months before we arrived. Due to the massive burn areas, rains that fell after caused major flooding and mudslides in the town. We saw remnants of the mudslides, and thus the fire, in the blocked off hiking areas and roads under repair. Durango is a resilient town, though, and the people seemed strong. 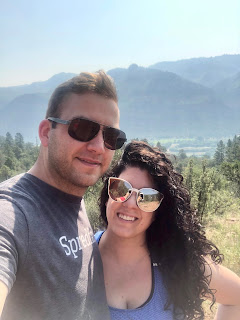 A couple other special things that we did while we were in the area were spending a day at the spa, and Wade got a new tattoo on his right forearm. For our anniversary gift to one another we decided to do a spa day. We had been to The Woodhouse Day Spa in Durango when we went there for the fourth of July weekend in 2015, so we decided to go back. It is a luxurious, relaxing place, and we love spending time in the thick white robes, sauna, steam shower, and quiet room overlooking the river even before getting our spa treatments. As a special gift partly from both of our parents, Wade enjoyed a Swedish massage, and I got a warm agave nectar pedicure. Both were very relaxing. 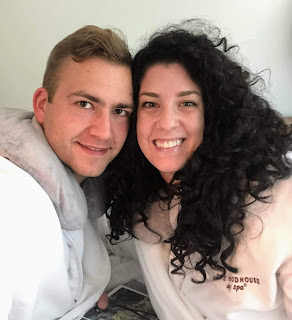 Another special thing that we did while in Durango was Wade got his third tattoo. Again, we had been to this business before, namely when we got our matching arrow/cross tattoos to commemorate our ten years together when we went to Durango for the new years weekend in 2016. We went back to Your Flesh Tattoo & Piercing, and Wade worked with the artist Brian Hutflies to make his design come to life. Wade got this tattoo done in honor of his older brother Matt who passed away on June 1st of this year. Wade explained that he got the tattoo done in memory of how much his brother loved both to bike and the diner that he managed and planned one day to take over. Matt's passing has been difficult, especially as it was so unexpected, and I'm glad that Wade took this step to commemorate not only Matt's passing but his life. 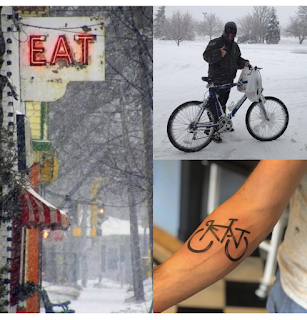 Our time in Durango was really sweet, and I'm glad we went. We drove there and back, so it was quite a long trip, but we actually enjoyed that as well. The Harry Potter audio books got us through. We finished up Order of the Phoenix and moved on to Half-Blood Prince before we got home. On the way out to Durango we stopped in both Lincoln, NE and Denver, CO. On the way back we made one stop in a small town in Nebraska for one night.

One of the major projects that I worked on this summer was the revise and resubmit that I received from an article manuscript that I submitted to the online journal Peitho: A Journal of the Coalition of Feminist Scholars in the History of Rhetoric and Composition. I originally submitted the manuscript back in 2015, and I had sent in a second draft since then, but this third revision was long overdue. I did, with the help of a mentor, Maureen, and my writing group, finally send it back in, and just today I received another revise and resubmit! The work the editors are asking me to do is more re framing and clarification. I hope to be able to do that in the next month or so and send it back once more. This publishing work is not for the faint of heart! I think once I have completed this manuscript I will turn my attention to some of the data that I collected from my students' work and draft an article manuscript discussing some of my findings.

Along with this article revision, I have spent much of my working time this summer (when I wasn't traveling, helping family, or recovering from my surgery) putting together my classes for the fall. I will be teaching two sections of College Writing 1, Advanced Writing, and Business Writing and Technical Communication. While in CO I put together syllabi for all four of the courses, and I am glad to at least have that much done, even if there is still much more to get done before classes start.

I will include links to my course syllabi here. I think it is good to have record of these documents, as well as be willing to share them. Whenever I make new syllabi for new institutions I try to include components of the institution in the document themselves. In this case, I've used the Olivet colors of purple and gold throughout the pages, as well as put the logo on the top right corners:

In addition to syllabi writing I've been putting together project descriptions, responding to emails, and getting aquatinted with the Olivet system. Many hours of work are very little seen in these beginning stages of projects, but I am excited nonetheless to jump in! As I've prepared for this year, I've taken the aesthetic, spirit, and words of my Harry Potter house (which I sorted into on Pottermore) to heart! I'm prepared with my golden accents, my mindset of hard work and patience, and even printed a beautiful Hufflepuff poster to hang in my office. Here's to a wonderful new year!