Making Moments: A Reflection on the Feminism and Rhetorics 2015 Conference 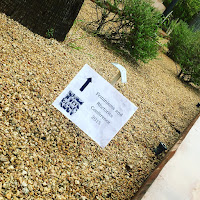 Fem/Rhet 2015, hosted at ASU and co-chaired by Maureen Daly Goggin and Shirley Rose, was truly a wonderful conference. The theme of the conference was “Women’s Ways of Making,” a play on the well-known feminist discussion of women’s ways of knowing. For this blog title, I played on that theme a bit to highlight the making of moments. Moments may seem to just happen, but I think that there is a constructing of moments that is really important to recognize- especially as it pertains to conference participation.

Because Maureen and Shirley co-chaired the conference and it was held on my campus, I think that the opportunity to make moments was especially viable at this conference. I was part of the volunteer committee, and I was able to help prepare for the conference by consolidating all of the attendees email addresses into one group and compiling a list of local events for the weekend, serve as an attendant at the registration table, usher a concert, and chair for a panel session. I also helped in other areas as I could, answering questions or directing people to locations or locating the right people to get answers from. I enjoyed being on the committee, and I think that manning the registration desk on the first day was probably one of my favorite tasks. It may seem a bit menial, but I was glad to welcome people to the conference and be one of the first faces they saw while giving them a swag bag filled with awesome stuff!

I chaired a session entitled “Recipe Rhetorics: Cookbooks as Arguments” on Thursday, the second day of the conference. There were three women on the panel, and they each presented on cookbooks through a feminist lens. The presentations, as well as the discussion following the presentations, were interesting and informative. Although, I was concerned with some of the essentializing that I heard in two of the presentations in relationship to authorship identity and assumptions of agency. I recognize the complexity of analyzing historical texts that are embedded with personal and cultural meaning for the authors, readers, and analyzers of the cookbooks, but I also think that in food work it is important to not make assumptions or essentialist statements, as is true in any study within the field of rhetoric and composition, and English more generally. 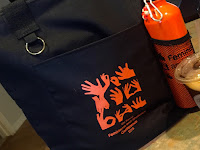 Sitting at the registration desk and chairing the panel were two opportunities that I was able to glean from at the conference. Within those larger opportunities, though, I was able to make smaller moments by introducing myself to attendees at the registration table, or bring up one of my concerns to a presenter regarding the assumptions of agency of women slaves about whom the cookbook was written that she was discussing. While some moments may not have been particularly impactful for all involved, I think that that intentionality is important.

The one drawback about having the conference on my own campus was that there were still everyday responsibilities that needed attention. Since my husband was in CA attending a conference, I was in charge of the dogs and had to keep their needs in mind in deciding how many hours to be away, etc. Also, though I canceled the majority of my classes, I did still need to teach some, which split my attention between the conference and the work that needed to be done to prepare and then teach those classes. As is a common joke in academia, the work-life balance does not always seem like such a balance, but it is a reality that many of us must face.

I was able to make more moments in the following ways at Fem/Rhet:
Feminisms and Rhetorics may be my favorite conference that I have attended to date. The people who were there, the ideas that were expressed, and the attitude of inclusivity and openness that was adopted by the majority of the attendees was energizing and inspiring. The full conference program is a good encapsulation of the variety of discussions and interests represented at this conference. Also, my colleague Stephen Hopkins put together a short video showing a variety of the moments of making that were presented at this conference, including some of the ones I mentioned above. I look forward to attending again in two years in Ohio to make more moments! 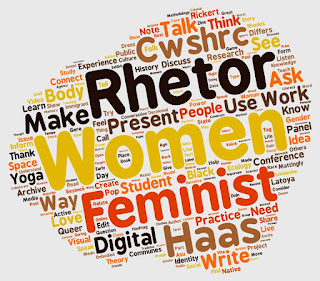 Wordle made by Allegra Smith from the compilation of conference tweets hash tagged #FemRhet2015
Posted by Kayla at 11:55 No comments: